I’ve been on a bit of a hiatus recently while finding a new airport to work at because to my surprise i’m not rich from blogging yet. But i’m back at it again with a hot weird take. I don’t think its lost on anyone that lobsters are arguably the weirdest animals in the world. Me being the self proclaimed genius I am have after many moons figured out that they are actually just aliens.

Hang with me here while I take you on this wild ride proving that lobsters are not from this planet so you too can be as woke as I. We’ll start with the obvious here, just look at the fucking things. They have tentacles coming out of their head, their eyes are black pebbles, and their bodies really don’t differ too much from the Facehugger aliens from the Alien Vs Predator movies. 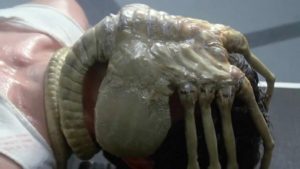 Now after a little research I discovered that these extra terrestrial beings are actually immortal.Thats right lobsters die only from non-natural causes. If left alone lobsters will continue to grow and live at a consistent rate. In 2008 off the coast of Newfoundland, Canada a lobster was discovered and estimated to be 140 years old weighing 20 fucking pounds. I don’t think you need to be issac newton to realize that something that continues to live with out dying is not from this world.

I also don’t really trust anything that can breath underwater and on land it just doesn’t make sense. On top of that lobsters have somehow brainwashed the human race into thinking that they’re worth $30 a pound for their well below average tasting meat. Seriously I think the only reason anyone orders lobster is for the opportunity to post a story that they’re eating somewhere expensive. Yea im guilty of that too but thats beyond the point.

All in all lobsters are freaks i’m not really sure why they have decided to inhabit our planet or why no one else seems to be as concerned as I. Hopefully this will wake you sheeple up and you’ll start asking the questions i’m too lazy to ask so we can send these weird little monsters back to what ever shithole planet they crawled out of.